Building A Showcase Routine . . .
Or How I Became Super Mario

For many years I had wanted to put in the time and effort of putting together and performing a showcase routine.  I had previous experience performing on stage in musicals and improv theater, so I felt I could bring that experience into a routine, and make something really entertaining.  Last year (2011), I finally had the opportunity to choreograph and perform my first showcase routine, and this is a summary of my journey and the creative process I took to get there.

When I first started swing dancing, showcase routines were really the most prestigious of all the competitions, because winning this division at an event was an acknowledgement of not only a dancer's technique, but also their ability to be creative and perform on their own (with a partner) out on that big floor for all to see. I think that showcase still has this prestige, but there are a lot of dancers who don't appreciate this division, and hold social dancing up on a higher pedestal.  I think that both of these things are important for the community as a whole, for while social dancing is about dancing with our peers, showcase routines are about inviting an audience into watching a performance, and this can appeal to a wider audience than just swing dancers.

Prior to last year, I had actually cut music and started choreographing about five different routines before I landed on the Super Mario idea.  Those routines never came to fruition, because I didn't think my partner (at the time) and I were ready to put in the time and effort of said routine, and also because I didn't have confidence in myself and my dancing.  That really changed with an impromptu competition with a new partner, Emily. In 2010, literally two weeks before Camp Hollywood (aka The National Jitterbug Championships), we both bumped into each other at a social dance event, realized neither one of us had a partner for the Amateur Lindy Division. So, we made the decision to give it a shot. Video of the competition is below (I'm the one in the yellow shirt):

We had very limited air steps prepared, so we did our own thing, adding in a chest bump and a "fake" aerial, and still won 2nd place in a division we really didn't prepare that much for and just had fun and danced within our ability.  What worked was that our personalities meshed well when dancing.  So, after that, I asked Emily if she wanted to try working toward a showcase routine and she agreed.

I played with a few ideas for different routines, and listened to a lot of songs, trying to envision how the choreography would look with each song.  My main goal for this first showcase routine was not try and create a winning routine.  It was to try and create a routine that people would remember, and to create something that would have an impact.  Recalling previous years at various competitions, I don't remember which routine won which competitions, but I remember certain routines for their theme, idea, music, or even one shining moment that made them stand out from all of the others.  Novelty isn't always an appreciated idea in the swing community, but with showcase routines, its definitely a good concept to utilize in order to make yourself stand out.

The main inspiration for the routine came from this video on YouTube:


After I discovered this great cover to the Super Mario Brothers 2 Theme Song, I set out to find as many different "jazz" and "swing" versions I could find.  The song was great, but this theme is not as well known as the main theme from the first Super Mario Brothers game, so I knew I had to include that in the beginning of the routine.  When the complete song was cut together, these were songs I used:

Song 3 - Underworld Theme
Marley -- Piano Medley of Mario Tunes -- If Fats or Tatum had a Nintendo...

My philosophy, as it is, when it it comes to showcase routines is to let the choreography come from the music.  If the music isn't the driving force in the routine, then what's the point of having music?  This routine, however, couldn't just be straight swing dancing.  The point of this routine would be to tell a story.  To portray a live action reproduction of a level of Super Mario Brothers, so I added in all of the sound effects from the game as well as an intro from the 1980's TV Show "The Super Mario Brothers Super Show".  My favorite video game concept that came out of brainstorming was having the game "pause" in the middle of the routine.  The original idea was that we would simply do a break and freeze, but it wouldn't have the same impact as something "bigger".  When Emily and I were practicing various aerials to incorporate into our routine, we were prepping an air step called "The Knickerbocker" (where the follow basically does a back flip that's assisted by the lead), and I had no problem getting her up at my shoulder level and holding her there for a while.  That's when I had that "Eureka!" moment, and that was it!  That was a big move for the routine.  Everything else just fell into place as we put together the choreography.

Here is the end result:


What you don't see in this video is that we were the second couple to do our routine during the showcase division, and just before we went on, the sound system stopped working and it took them around 10 minutes to get it working again.  The entire time my stomach was in knots, as I always get nervous before competing, and it was even worse as this was my first showcase. Then, once they finally got the music going again, during the routine, the DJ mistook our "pause" as the end of the routine and stopped the song.  We probably should have left the floor at that point, but I really wanted to finish the routine we'd worked so hard on.  Once he got it back up and running, we ended up doing an instant replay of the aerial, finished the routine and brought the house down.  They even called us back for a second bow.

On Sunday, when they gave out the awards, two amazing things happened.  First, we won 4th place in the Showcase Division, which I was ecstatic about being my first showcase, but wen we came up to receive our trophy, the audience started chanting "First Place...First Place..."  I was felt very honored to receive that support from my peers, and I tried to express my thanks, but also let them know I was ok with our placement.  Even though our routine was entertaining and popular with the audience, it was not a technically difficult routine, which is why I was happy with our placement, and I wanted to respect the other dancers who placed above us.  The second event that occurred, was at the end of the awards ceremony, when Emily and I were awarded the "Golden Budgie Trophy", which, if you've never been to Camp Hollywood, is an award given for a single event that occurs over the weekend that basically brings the house down and that everyone ends up talking about. This was definitely the best award I've ever received at a dance competition. 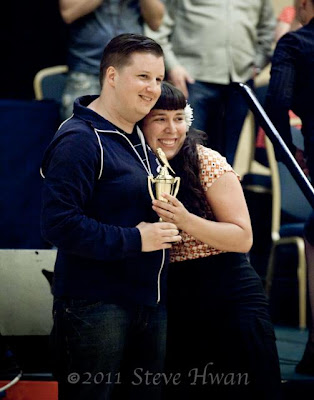 And that was the end of it . . . at least that's what I thought.  I uploaded a version of the routine to YouTube so I could show my family and friends that had not seen it, and they passed it on to their friends and family, and so on . . .

Within a few weeks, the video spread like wildfire, ending up on Yahoo! News, the Yahoo! Front Page G4TV's Website, Attack of the Show (August 1, 2011), CBS News, and niche websites like Kotaku, Geekologie and Geeks Are Sexy.  It was also the #1 sports video on Yahoo! Japan for a couple of weeks, and was featured on Nintendo's Official YouTube Channel.  Between the multiple versions uploaded to YouTube, and the version on Yahoo, my routine had gotten over a million views in a few weeks!

Obviously, I never expected any of that.  I just wanted to make an entertaining routine, but I think that if more people could do routines like this, that have a little bit of a pop culture reference in them, we might get more people interested in Lindy Hop, and that's always a good thing.

I'm currently working on a new showcase routine with a new partner for this year at Camp Hollywood.  I'm not going to try and top the idea I had from last year, so it will be a more "standard" showcase routine concept than Super Mario, but we'll see how it plays out.  The benefit of my previous success is that I have much more confidence in my choreography and ideas, and I don't really have anything to prove.  I'm just going to try and put out something that's entertaining and see how people react to it.  Hopefully, it will go over well.

For those of you who'd like to see a version of the routine without the stop in it (or me losing my hat), here's an encore performance, performed at Lindygroove: