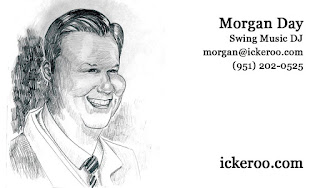 Morgan Day has been swing dancing since 1997, and teaching and DJing swing since 2003, when he became president of the UC Riverside Swing Club.  As a dancer, he is most known for winning the “Golden Budgie Rock The House Award” at the National Jitterbug Championships (aka Camp Hollywood) in 2011 for his “Super Mario Brothers” showcase routine, which went viral in the United States and Japan.  He is also a member of the Camp Hollywood Hall of Fame, a regular contributor to the “Hey Mister Jesse” Podcast, and leads a swing jazz band called “The Mad Hat Hucksters” based out of San Diego.